Use Of Common Pesticide Imidacloprid Linked To Colony Declines 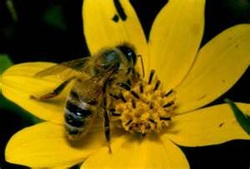 The likely culprit in sharp worldwide declines in honeybee colonies since 2006 is imidacloprid, one of the most widely used pesticides, according to a new study from Harvard School of Public Health (HSPH).

The authors, led by Alex Lu, associate professor of environmental exposure biology in the Department of Environmental Health, write that the new research provides "convincing evidence" of the link between imidacloprid and the phenomenon known as Colony Collapse Disorder (CCD), in which adult bees abandon their hives.

The study will appear in the June issue of the Bulletin of Insectology.

"The significance of bees to agriculture cannot be underestimated," says Lu. "And it apparently doesn't take much of the pesticide to affect the bees. Our experiment included pesticide amounts below what is normally present in the environment."

Pinpointing the cause of the problem is crucial because bees -- beyond producing honey -- are prime pollinators of roughly one-third of the crop species in the U.S., including fruits, vegetables, nuts, and livestock feed such as alfalfa and clover. Massive loss of honeybees could result in billions of dollars in agricultural losses, experts estimate.

Lu and his co-authors hypothesized that the uptick in CCD resulted from the presence of imidacloprid, a neonicotinoid introduced in the early 1990s. Bees can be exposed in two ways: through nectar from plants or through high-fructose corn syrup beekeepers use to feed their bees. (Since most U.S.-grown corn has been treated with imidacloprid, it's also found in corn syrup.)

In the summer of 2010, the researchers conducted an in situ study in Worcester County, Mass. aimed at replicating how imidacloprid may have caused the CCD outbreak. Over a 23-week period, they monitored bees in four different bee yards; each yard had four hives treated with different levels of imidacloprid and one control hive. After 12 weeks of imidacloprid dosing, all the bees were alive. But after 23 weeks, 15 out of 16 of the imidacloprid-treated hives -- 94% -- had died. Those exposed to the highest levels of the pesticide died first.

The characteristics of the dead hives were consistent with CCD, said Lu; the hives were empty except for food stores, some pollen, and young bees, with few dead bees nearby. When other conditions cause hive collapse -- such as disease or pests -- many dead bees are typically found inside and outside the affected hives.

Strikingly, said Lu, it took only low levels of imidacloprid to cause hive collapse -- less than what is typically used in crops or in areas where bees forage.

Scientists, policymakers, farmers, and beekeepers, alarmed at the sudden losses of between 30% and 90% of honeybee colonies since 2006, have posed numerous theories as to the cause of the collapse, such as pests, disease, pesticides, migratory beekeeping, or some combination of these factors. 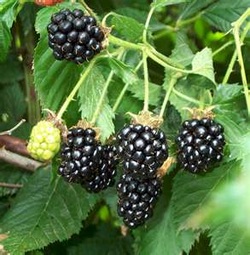 Bringing grains of pollen to waiting blackberry and red raspberry blossoms may be the special talent of a small, emerald-green bee called Osmia aglaia. That's according to Agricultural Research Service entomologist James H. Cane, who—in outdoor experiments in Oregon and Utah—has studied the pollination prowess of this 3/8-inch-long bee perhaps more extensively than any other scientist.

In recent years, hived honey bees across the country have been hit hard by a mostly mysterious condition known as colony collapse disorder. That problem—and others caused by mites, beetles, diseases and Africanized honey bees—have added even more urgency to the need to find proficient pollinators among America's wild native bees, noted Cane.

He's based at the ARS Pollinating Insect Biology, Management and Systematics Research Unit in Logan, Utah. In one series of experiments, Cane showed that O. aglaia bees work quickly, visiting just as many red raspberry flowers, and nearly as many blackberry blossoms, as do honey bees, in the same amount of time.

Both kinds of berries are mostly self-pollinating, meaning that they can form fruit without the need for insects to bring pollen to them. But better berries result if honey bees or O. aglaia visit red raspberry flowers, Cane found. The plump, well-formed fruits were 30 percent bigger than those on red raspberry plants not visited by either bee species 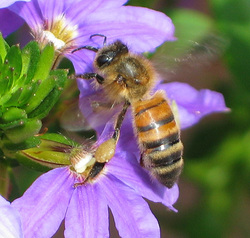 Insects Have 'Personalities' Too, Research On Novelty-Seeking Honey Bees Indicates ScienceDaily (Mar. 8, 2012) — A new study in Science suggests that thrill-seeking is not limited to humans and other vertebrates. Some honey bees, too, are more likely than others to seek adventure. The brains of these novelty-seeking bees exhibit distinct patterns of gene activity in molecular pathways known to be associated with thrill-seeking in humans, researchers report.

The findings offer a new window on the inner life of the honey bee hive, which once was viewed as a highly regimented colony of seemingly interchangeable workers taking on a few specific roles (nurse or forager, for example) to serve their queen. Now it appears that individual honey bees actually differ in their desire or willingness to perform particular tasks, said University of Illinois entomology professor and Institute for Genomic Biology director

Gene Robinson, who led the study. These differences may be due, in part, to variability in the bees' personalities, he said.

"In humans, differences in novelty-seeking are a component of personality," he said. "Could insects also have personalities?"

Robinson and his colleagues studied two behaviors that looked like novelty-seeking in honey bees: scouting for nest sites and scouting for food.

When a colony of bees outgrows its living quarters, the hive divides and the swarm must find a suitable new home. At this moment of crisis, a few intrepid bees -- less than 5 percent of the swarm -- take off to hunt for a hive.

These bees, called nest scouts, are on average 3.4 times more likely than their peers to also become food scouts, the researchers found.

"There is a gold standard for personality research and that is if you show the same tendency in different contexts, then that can be called a personality trait," Robinson said. Not only do certain bees exhibit signs of novelty-seeking, he said, but their willingness or eagerness to "go the extra mile" can be vital to the life of the hive.

The researchers wanted to determine the molecular basis for these differences in honey bee behavior. They used whole-genome microarray analysis to look for differences in the activity of thousands of genes in the brains of scouts and non-scouts.

"People are trying to understand what is the basis of novelty-seeking behavior in humans and in animals," who Robinson, who also is affiliated with the Neuroscience Program at Illinois. "And a lot of the thinking has to do with the relationship between how the (brain's) reward system is engaged in response to some experience."

The researchers found thousands of distinct differences in gene activity in the brains of scouting and non-scouting bees.

"We expected to find some, but the magnitude of the differences was surprising given that both scouts and non-scouts are foragers," Robinson said.

Among the many differentially expressed genes were several related to catecholamine, glutamate and gamma-aminobutyric acid (GABA) signaling, and the researchers zeroed in on these because they are involved in regulating novelty-seeking and responding to reward in vertebrates.

To test whether the changes in brain signaling caused the novelty-seeking, the researchers subjected groups of bees to treatments that would increase or inhibit these chemicals in the brain.

Two treatments (with glutamate and octopamine) increased scouting in bees that had not scouted before. Blocking dopamine signaling decreased scouting behavior, the researchers found.

"Our results say that novelty-seeking in humans and other vertebrates has parallels in an insect," Robinson said. "One can see the same sort of consistent behavioral differences and molecular underpinnings."

The findings also suggest that insects, humans and other animals made use of the same genetic "toolkit" in the evolution of behavior, Robinson said. The tools in the toolkit -- genes encoding certain molecular pathways -- may play a role in the same types of behaviors, but each species has adapted them in its own, distinctive way.

"It looks like the same molecular pathways have been engaged repeatedly in evolution to give rise to individual differences in novelty-seeking," he said.

Collaborators on this study included researchers from Wellesley College and Cornell University.